The Negative Effects of Divorce on Adolescents: How to Mitigate the Damage Divorce is a hard topic for many families. Not only does an ending marriage feel like a failure, there is a lot of emotional turmoil that typically precedes the divorce and hurt that follows it. Sometimes divorce is the best option for everyone involved, but that doesn’t make it less devastating. Children often feel the greatest trauma when their parents split.

Both marriage and divorce rates have been decreasing over the past 10 years, according to the U.S. Census Bureau. The CDC reports there were nearly 2.02 million married couples in 2019 with 747k divorces. Between 40-50% of all marriages will end in divorce.

Not only do children often witness the scary turmoil firsthand, but their entire world is also turned upside down when a divorce occurs. Young children tend to experience grief and try to cling to their parents—being sad or sometimes acting out to get attention. Teens tend to see divorce as a betrayal and may wall-off, pulling away from their parents.

Even though divorce has become extremely common, it still comes with an emotional cost.

Many parents hope that the constant conflict before the divorce will end after it is finalized and their children will be better off for it. You may feel you will both be happier living life separately. Your teen may not react accordingly or have the same feelings based on their perspective of the split.

How Do Teens Respond to Divorced Parents?

The reality is, that most parents still struggle to get along after the separation. This means that children often feel trapped in the middle or pitted against the other parent.

On the flip side, the teen that feels betrayed may also start trying to play one parent against the other. In their anger, a teen may feel the best thing to do is make the most of the situation and work the situation to their advantage. This could include:

In a two-parent, unified household, these kinds of behaviors just wouldn’t fly. But, when parents are separated, the teen can exert more authority and play the field accordingly. This can lead to some concerning mental health issues that may occur with practiced manipulation, emotional apathy, anger, or substance abuse. How Does Divorce Impact Troubled Teens?

Divorce can also cause a shift in the family’s socioeconomic position and change the parents’ working dynamic. In most cases, the combined household expenses increase when parents split, causing a thinner spread of funds. This can trickle into a teen’s own behavior later in life. A published review from 2019 explains:

Today, only about 60% of US children live with their married, biological parents…

Research has documented that parental divorce/separation is associated with an increased risk for child and adolescent adjustment problems, including academic difficulties (e.g., lower grades and school dropout), disruptive behaviors (e.g., conduct and substance use problems), and depressed mood.

Children of divorced/separated parents are also more likely to engage in risky sexual behavior, live in poverty, and experience their own family instability. Risk typically increases by a factor between 1.5 and 2. 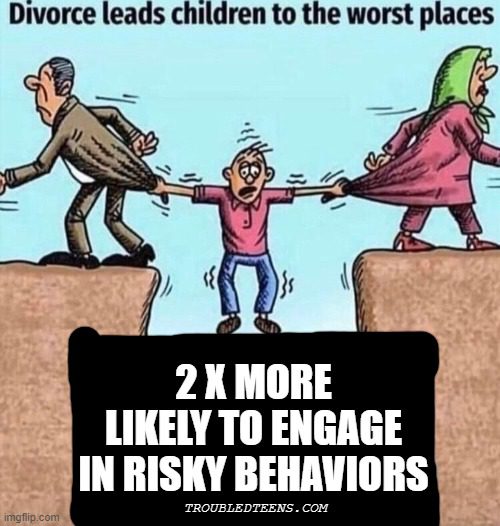 Ways to Help a Teen in Crisis

If your teen is already at-risk and you are considering a divorce, it is time to start counseling to support that transition. A family therapist can often help navigate the difficult nature and the disruption of divorce and support your teen through a difficult time. It is also important for both parents to get on board with keeping the children at the center of the relationship moving forward. If parents are still at odds and can’t co-parent without conflict, things will only be harder on the teen involved.

If you have already been through a divorce, your teen may be struggling. Your teen may exhibit warning signs of mental health struggles caused by the divorce or family dynamic, including:

In these cases, you may need a more dramatic solution. A change of scenery at a therapeutic boarding school may help them stop them from hanging around the wrong friends or participating in risky behavior. Treatment for struggling teens comes in many forms.

If you are looking for the right solution, contact us today.

Has your child's behavior changed? Are you worried your child has given up? Is your child acting out or engaging in self-destructive behaviors? We can help you find the right therapeutic residential program.
Yes, I Need Help For My Child!

Speak to an expert about The Negative Effects of Divorce on Adolescents: How to Mitigate the Damage and your teenager.