Any Parent’s Dilemma: What Should You Do After Learning Your Teenager is Sexually Active?

Since 1990, the percentage of sexually active teenagers in the U.S. has been steadily declining, according to the Centers for Disease Control and Prevention.

The most recent data shows that about 40 percent of adolescents between 15 and 19 years old have had sexual intercourse at least once, with the majority of sexually active teens using some form of contraception--condoms, birth control pills or spermicidal agents.

Statistics like these should help parents of teenagers breathe a little easier every time their child goes out on a date or with friends.

Unfortunately, the decreasing rate of sexually active middle and high schoolers doesn’t make learning your teen is having sex any less frightening and stressful.

Most parents want answers to questions like these but don’t know who to ask. They are afraid to ask or just don’t want to think about their teen possibly being sexually active.

Do sexually active teens exhibit particular behaviors while they are having sexual intercourse?

When you discover your teen is having sex, the first thing to do is stay calm! Do not initiate a combative confrontation with their child. Sit down with your spouse or partner and talk about what you want to say to your teen.

Signs Your Teenager is Sexually Active

A teenager will inevitably have several boyfriends or girlfriends throughout high school.

Although having a boyfriend or girlfriend doesn’t necessarily mean a teen is having sex. The longer the relationship lasts, the higher the chance they will at some point have sexual intercourse.

Suppose your older teen is dating a steady boyfriend or girlfriend. In that case, they may eventually come to you and ask about birth control.

If this happens, your child is being proactive and responsible and addressing the risk of teen pregnancy and STDs. While hearing this may shock you at first, resist the urge to reprimand your child. Instead, give yourself a big pat on the back because it means your teen is being mature.

Claiming they are spending the night at a friend’s house could indicate a teen is planning to do something they know they shouldn’t be doing.

For example, Lucy’s 14-year-old daughter Macy has spent one night a week at her best friend Amy’s house for the past year.

Lucy never thought about calling Amy’s mother to confirm her daughter’s arrival simply because she knew her daughter was there.

One night, Lucy received a frantic call from her mother. Lucy’s father had had a heart attack and was in the emergency room. Immediately after hanging up, Lucy called Amy’s mother to tell her she wouldn’t be home all night.

Because of this incident, Lucy discovered Macy had not been staying all night at Amy’s house for over a month. Instead, Lucy found Macy had been spending her nights with her boyfriend the entire time.

Be alert! If your teen’s good grades suddenly drop to Cs or too many Ds and Fs that is definitely a warning sign that something is wrong.

Skipping school, poor grades, or getting in trouble at school indicate something is distracting them from schoolwork. It could be a new (older) boyfriend or girlfriend who is demanding all their attention.

It could be one of many things, such as substance use, drug addiction, or mental health issue.

Parents must get to the bottom of a teen’s sudden and unusual bad grades by having a heart-to-heart discussion with their child immediately.

How Can a Parent Tell the Difference Between Normal and Abnormal Sexual Behavior in Teenagers?

Children between nine and 12 years of age begin undergoing a series of gradual hormonal changes that cause the development of physical sex characteristics.

Both boys and girls also become more interested in basic sexual behaviors (kissing, fondling). They may ask parents where “babies come from.”

Unfortunately, children with unlimited access to Internet sites may learn misinformation about sexual activity or accidentally come across pornographic websites.

Parents should consider restricting Internet content until teens are in high school and have talked about sex, reproduction, STDs, and pregnancy with their teens.

Young adolescents will need guidance from parents about sexual intercourse, the consequences of unprotected sex, and the personal consequences of sexual behavior. It is not uncommon for boys to engage in periodic voyeurism when given a chance.

This type of incidental voyeurism is normal for boys his age.

How to Handle a Sexually Active Teenager

The perfect time to talk to your teenager about sex may arise randomly, like when a mother is clothes shopping with her daughter or a father is fishing with their son.

Take advantage of intimate times with your teen to talk about sex. The more conversations you have about sex with your child, the easier it becomes for your teen to bring up the subject.

Before talking about sexually transmitted diseases with your teenager, learn as much as you can about common STDs, especially chlamydia, genital herpes, HIV, and human papillomavirus (HPV).

Focus on the consequences of teen pregnancy and the responsibilities of having children. Be honest and direct with answers to your teen’s questions, and always use clinical terms when talking about sexual intercourse. Never use slang words for sexual activities.

Teens talking about sex with other teens use slang and, unfortunately, vulgar terms for sex. Your teenager expects you to speak with them about sex like a parent.

Troubled teens with mental health problems, anxiety, depression, ADHD, self-esteem issues, or substance abuse disorders often engage in high-risk sexual activity. They can put their life at risk or threaten others without considering the consequences.

Should You Consider Residential Treatment Center?

If you are a parent who tried to help your sexually active teenager at home but nothing has worked. It may be time to consider a residential treatment center offering behavioral therapies for out-of-control teens.

Contact Us Today to Learn How You Can Help Your Child! 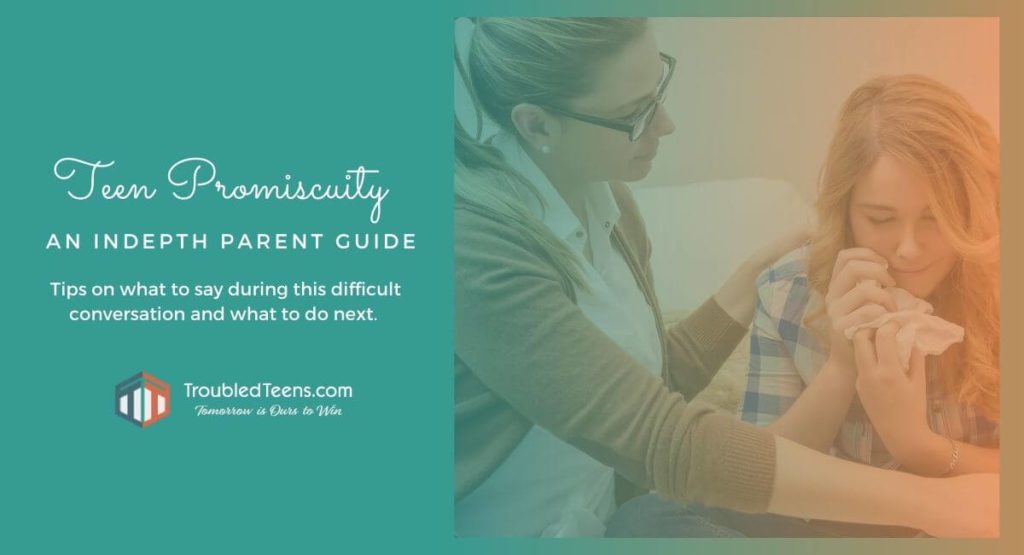 Speak to an expert about Any Parent’s Dilemma: What Should You Do After Learning Your Teenager is Sexually Active? and your teenager.