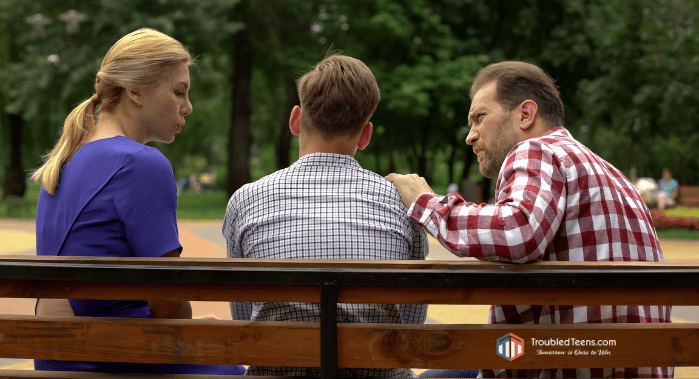 The level of concern over teen mental health among parents of troubled teens has never been higher than today. Just five short years ago, a survey completed by Pew Research revealed that parents were concerned mostly about their child being bullied (60 percent).

Other top concerns of parents before the COVID pandemic include:

By 2022, parental worry and anxiety over all these issues have increased alarmingly–and for good reason.   In 2021, the American Academy of Child and Adolescent Psychiatry proclaimed a national emergency existed over the state of child and teenage mental health in the U.S.

While the pandemic undoubtedly worsened the rate of children suffering from behavioral disorders and mental illness, parents also point to social media as another primary factor impacting the well-being of their children. Studies indicate that the leading concerns parents have about teens using social media sites include:

A troubled teen who is coping with the consequences of the COVID-19 pandemic, such as isolation, being out of school, parents losing jobs, pandemic-related evictions, and an unhealthy reliance on social media, is at extreme risk of developing severe behavioral disorders and/or mental illness.

This also brings us to another parenting issue. What should parents do when their child shows signs of a behavioral disorder or mental illness? When does depression or generalized anxiety disorder require more than outpatient treatment for teens?

A behavioral disorder is characterized by a teen’s out-of-control behaviors and how these behaviors lead to adverse consequences that work to fuel the disorder.

Clinicians diagnose children with a behavioral disorder if the child has exhibited a clear pattern of aberrant, disruptive behaviors for at least six months. Behavioral disorders always cause the child problems at home, school, and with peer relationships. They also share similar traits, such as:

A mental illness is a medical disease that arises from the way a person thinks rather than the way a person behaves. It can be difficult for parents of teens suffering from depression or a generalized anxiety disorder to recognize their child needs help because the child may not behave out of the ordinary.

A behavioral disorder is characterized by a teen's out-of-control behaviors and how these behaviors lead to adverse consequences that work to fuel the disorder.

The 15 Most Concerning Issues for Parents of Troubled Teenagers

Does It Mean Your Teen has a Mental Health Issues or Behavioral Disorder?

These are mental illnesses that may be mistaken for normal teen “doom and gloom” moods. When signs of depression and anxiety continue longer than several weeks, parents should consider talking to a school counselor for advice on addressing their child’s depression or anxiety.

Children who lie to avoid the consequences of their actions understand their behavior is wrong. Lying is a characteristic of conduct disorder, oppositional defiant disorder, and sometimes ADHD.

3.  Spending Too Much Time Online

Internet addiction includes gaming addiction, social media obsession, and browsing chatrooms. Teens spending most of their time online may be suffering from a mental illness (depression, anxiety, delusional disorder), or a behavioral disorder (ADHD, anorexia nervosa/bulimia, or oppositional defiant disorder (ODD) if the teen is engaging in cyberbullying).

4.  Withdrawing from Friends and Social Activities

Depression, anxiety, schizophrenia, and online addiction often cause a teen to isolate themselves from friends and family.

Failing classes in school, skipping school, or being thrown out of school is a classic sign of a conduct disorder, ODD, or ADHD. Severe depression and anxiety can also impact a child’s school performance.

6.  Giving In to Peer Pressure

Depression, anxiety, poor self-esteem, and ADHD can make teens vulnerable to falling in with the wrong crowd.

Children and teens with conduct disorder or ODD may bully peers. Bullying is also a behavior that neglected kids use to get the attention they crave. Alternately, bullying is seen in “entitled”, overindulged children who could be developing sociopathic tendencies.

The fine line between normal teenage rebelliousness and defiance and pathological rebelliousness/defiance is crossed when the child’s behavior severely disrupts their family, social, and school life.

Major depression, generalized anxiety disorder, or another teen mental health issue is likely behind these problems.

Teens who question their gender identity do not have a behavioral disorder or mental illness. However, unless they receive love and support from their parents, they could become severely depressed, suffer from suicide ideation, or run away from home.

Drug addiction, child abuse, and/or mental illness may cause a teen to have multiple sex partners.

14.  Running Away from Home

Kids with a behavioral disorder, mental illness or both may run away from home for numerous reasons, ranging from an unstable home life, dodging juvenile detention, or avoiding being sent to a residential treatment facility.

Mental health disorders such as major depression, severe anxiety disorders, and some personality disorders can make kids think about or actually harm themselves.

Parents with serious concerns about their troubled teen can call us today to learn how to get immediate help for their child. Many residential treatment centers and therapeutic boarding schools accept insurance to cover part of the cost of treatment.

Talk with a family advocate today about treatment methods and verifying your insurance.

Speak to an expert about 15 Top Mental Health Concerns of Parents with Troubled Teen and your teenager.